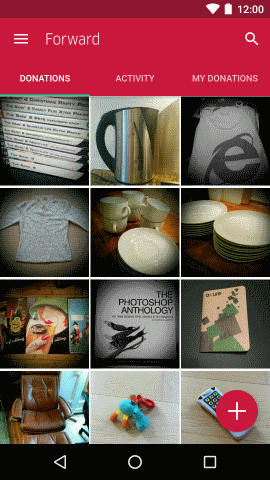 The past couple of months, I have been working on a project called Forward. Forward is an online community where you gather donations for your favorite charity by giving stuff away. If you have something that you want to throw out that is actually still in good shape, you can put it on Forward instead. The person who wants to get the item, pays for it by donating to a charity you specify.

People can get rid of things they no longer need, others can get stuff for an amount between $1 and $15, money goes to charity, and we encourage recycling. It’s #winning all over the place.

We have an Android version of the app on Google Play, and an iOS version on iTunes. You can also use the website to view items and post comments. (We hope to expand the functionality on the website soon.) 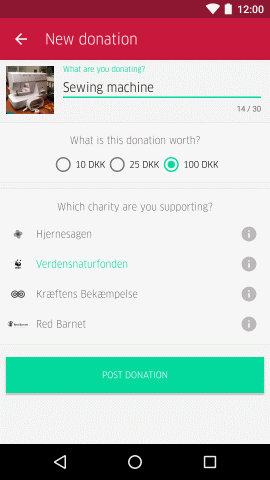 Because these items are real-life objects, everything on Forward is geographically restricted. People can only see and request items within a certain radius. Currently we are trying to build a community of users in Copenhagen (Denmark), which takes quite some time and effort. Hopefully we can expand to the rest of the country soon. After that, we will take the entire world! :-)

Growth is quite slow at the moment, but we have just announced a partnership with a charity organization in Denmark called Mødrehjælpen, which we hope will kick start user acquisition. We are also actively looking for more partnerships. Forward is a way for charity organizations to passively get some extra donations. All we ask in return, is that they make sure to let the world know they are a part of the Forward network.

If you happen to work for a charity organization, or know someone who does, or just have some questions about the project, get in touch: kevin@forwardapphq.com. I really hope we can make a difference, and help charity organizations that need money for all kinds of good causes.